“Truly, I say to you, this poor widow has put in more than all those who are contributing to the treasury. For they all contributed out of their abundance; but she out of her poverty has put in everything she had, her whole living.” Mark 12:43-44

We recently departed from Lafayette and made our way to Houston. We planned to go to the Zach Winters and Josh Garrels concert Saturday evening (He will be in Omaha January 28!).

When we arrived in Houston we were debating if we should get a hotel and how to spend our afternoon there until the concert began. We both decided we would not get a hotel. We entrusted our night to the Lord and drove into downtown Houston. As the traffic light turned red, a man stumbled in front of our car, walked across the street, then turned around and asked us for a few dollars. We didn’t have much time, but Jacob handed him a five-dollar bill.

We were trying to figure out how to get to the Cathedral or if there was a museum or public place where we could spend the afternoon so we parked a few blocks away. Shortly after the same man was walking down the block so we drove over to him and spoke awhile. His name was Christian. He was homeless, not properly dressed for the chilly weather, and seemed to have a mental disorder, possibly schizophrenia. We gave him some food and clothes.

Then we spent the rest of the afternoon and evening in the Co-Cathedral of the Sacred Heart. It was beautiful! Here are some images of the saint statues and stain glass windows: 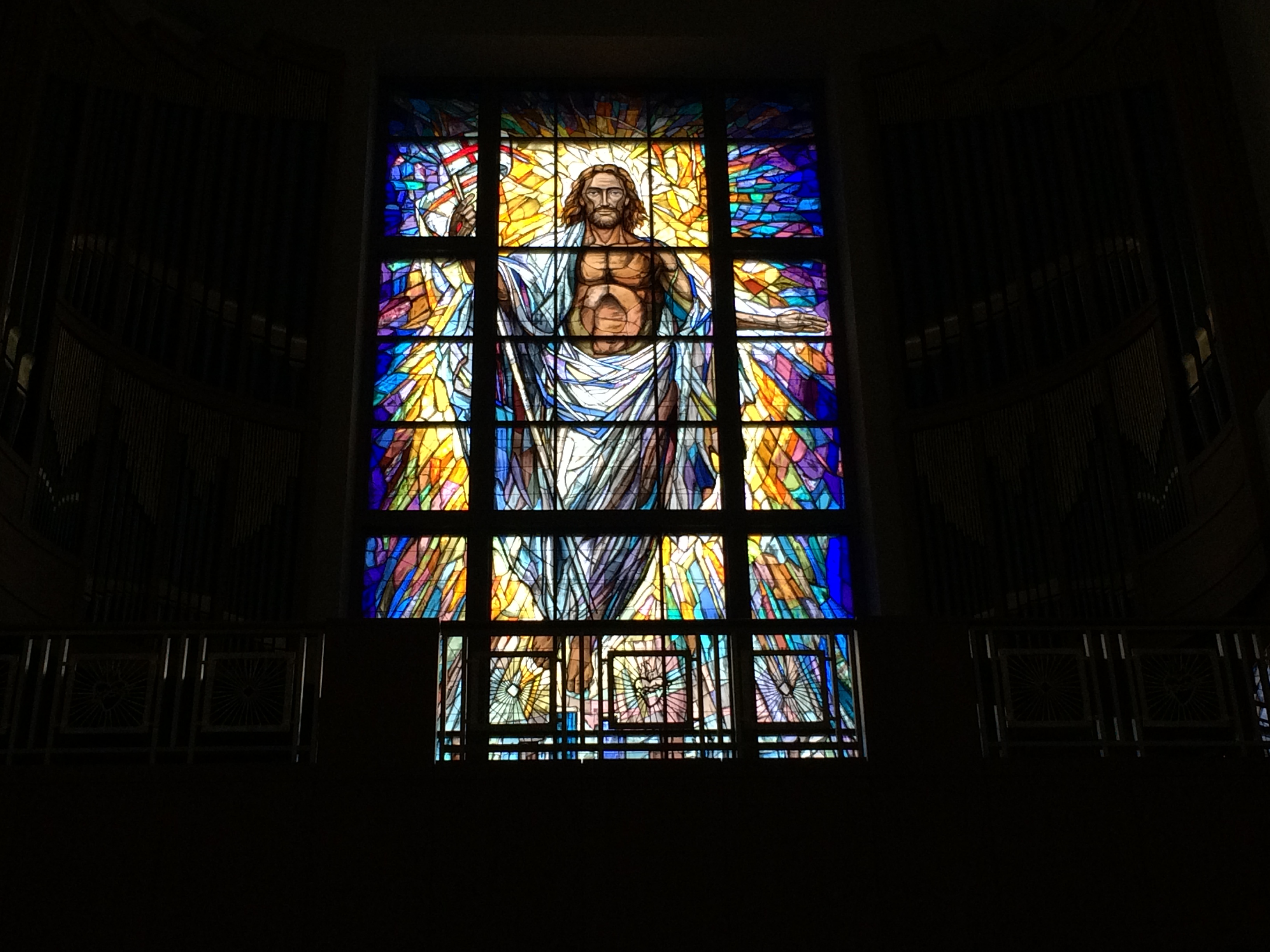 We were able to pray, eat, play with Blaise, receive the Sacrament of Confession, and attend Holy Mass for Sunday (pace in the lobby with Blaise). It was a relief from the cold rain that began to come down quickly outside. 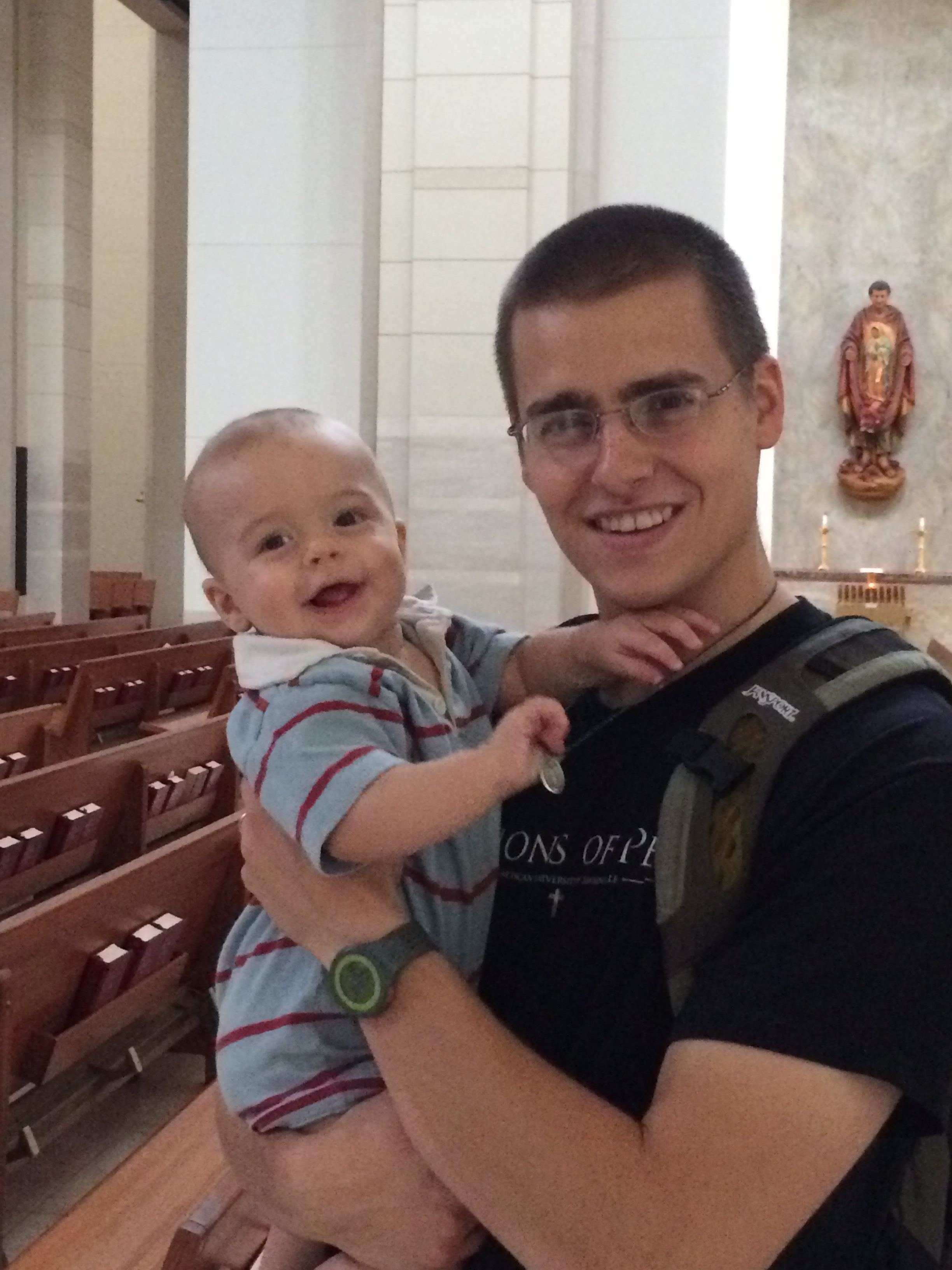 A bishop from California celebrated Mass. He reflected on the Gospel, “Truly, I say to you, this poor widow has put in more than all those who are contributing to the treasury. For they all contributed out of their abundance; but she out of her poverty has put in everything she had, her whole living.” When we see a poor person do we hand them a few dollars or do we give until it hurts? Do we see them as our brother or sister, as Jesus Himself? Are we willing to suffer a little in order to give them a little comfort or relief from the storm they are living in?

We were struck to the heart hearing the Gospel and homily. This poor man we had just met, Christian, was Jesus. Did we give to him out of our surplus or out of our need? How often we hear in church to not be attached to our possessions! But when we are really challenged to give when we ourselves are poor, that is a beautiful place to be. The poor have so much to teach us.

We left church and arrived at the concert in the evening. We were surprised by the amount of Christians that traveled to get there. We met Kelly and her husband who has taken many mission trips to over 15 countries in order to spread the Gospel “Good News”. Then we met a beautiful young couple, Alex, Heather, and their five-month-old son named after C. S. Lewis.

We had quite a bit in common with them besides the foundation of our faith in Jesus. We were both successful at getting our babies to sleep in our Ergobaby carriers during the concert. They agreed to let us stay in their home that evening. What a gift from the Lord!

Yet as we were leaving the concert we noticed a man sleeping in front of a few shops. The temperature had already dropped to the low 50s and there was still a misty rain. Jacob and I took a few more glances and noticed that this man, who had no blankets or coverings or paddings on the cement, was Christian. As both our hearts were moved to pity and sadness, Jacob got out of the car and covered him with one of our extra blankets.

Jesus gave us this gift to see Christian one last time. He never woke up, but Jacob covered him. We were able to serve Jesus in this man. So many people passed him by. They were giving their money to the bars, restaurants, concerts, parking tolls, etc. This man was overlooked and suffering. If we hadn’t been poor ourselves on a journey of discipleship with Jesus, I don’t think we would have acted to serve this man in such a way. We probably wouldn’t have had a blanket in our car. We would have just passed him by thinking the five dollars was good enough.

“You are a rich nation but on your streets I saw a man lying drunk and no one picked him up, no one seemed to bother about him, no one tried to restore to him his human dignity, to bring back to him the sense that he is a brother, a child of God.” -Mother Teresa

A blessing of staying at Alex and Heather’s was that we were able to hear their testimonies and attend their Christian Church in the morning. They fed us the best homemade breakfast burritos I have ever had. We were able to share more about the truth of our love for Mary and the saints.

After their service we headed on the road again as we were hoping to cross Texas in two days journey.

This is a journey only Our Father could have planned.

1 thought on “Houston (by Calena)”