Hello everyone. With our recent move it delayed me in getting this article posted. Well, I got it off the back-burner and here it is:

It lasted from October 28th to December 6th, 2018. Fifteen states were traversed (5,000 miles), thirteen families welcomed us into their beautiful homes, seven concerts were sung, one mission trip was experienced, and many memories were made throughout our family sojourning 2018 Trip.

In this blog entry, I will focus on our mission trip to Mexico from November 17th to November 24th in Allende, Coahuila, Mexico. 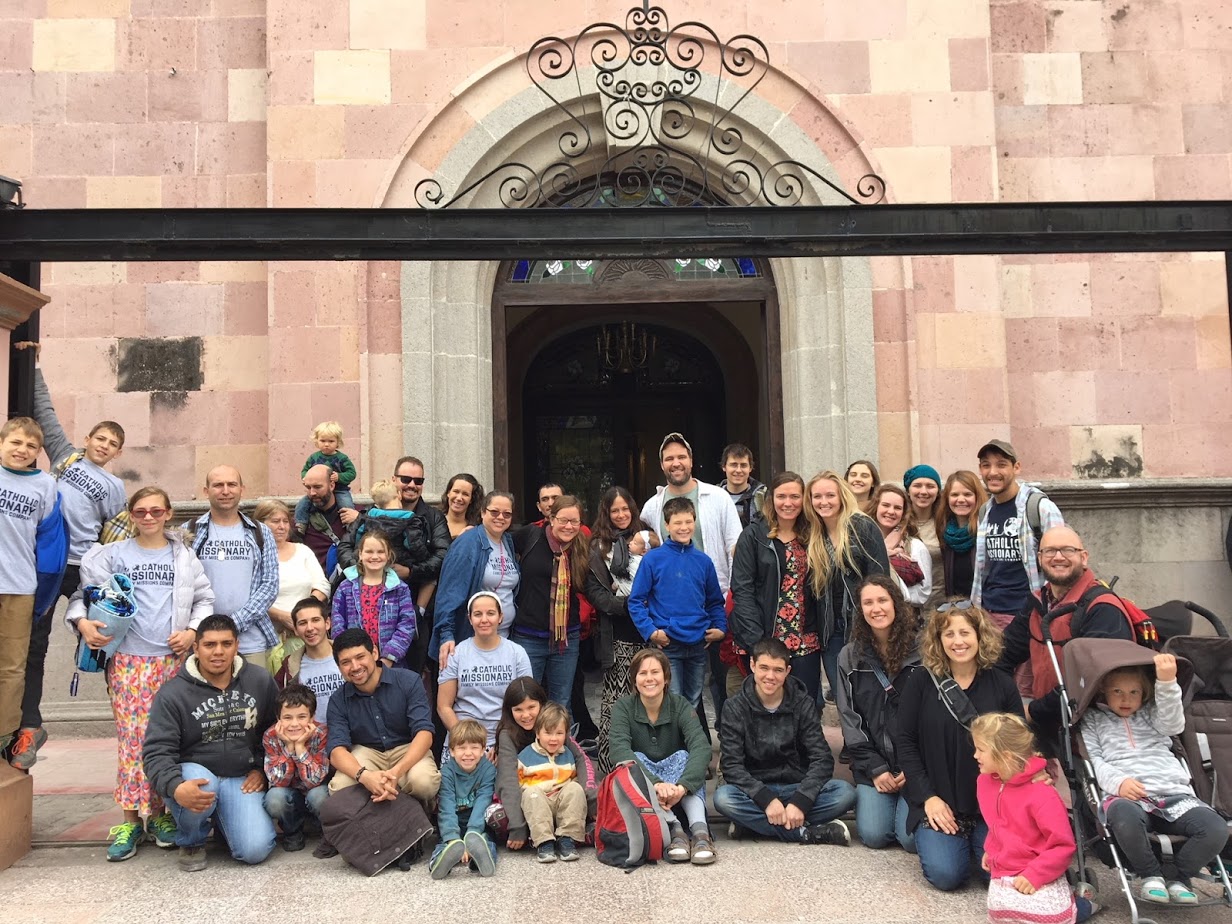 We made our way across the Mexican border going through Eagle Pass, TX and entering Piedras Negras, Coahuila. Nine families gathered and about 10 singles on our mission trip. Three of the families were already currently serving as full-time Catholic missionaries. Two families were in training (called INTAKE) and this mission trip was part of their preparation for full-time missions starting in early 2019. I just checked and saw that both of those families are now stationed in Costa Rica and getting settled in at their mission posts. For more info about FMC (Family Missions Company), visit https://familymissionscompany.com. 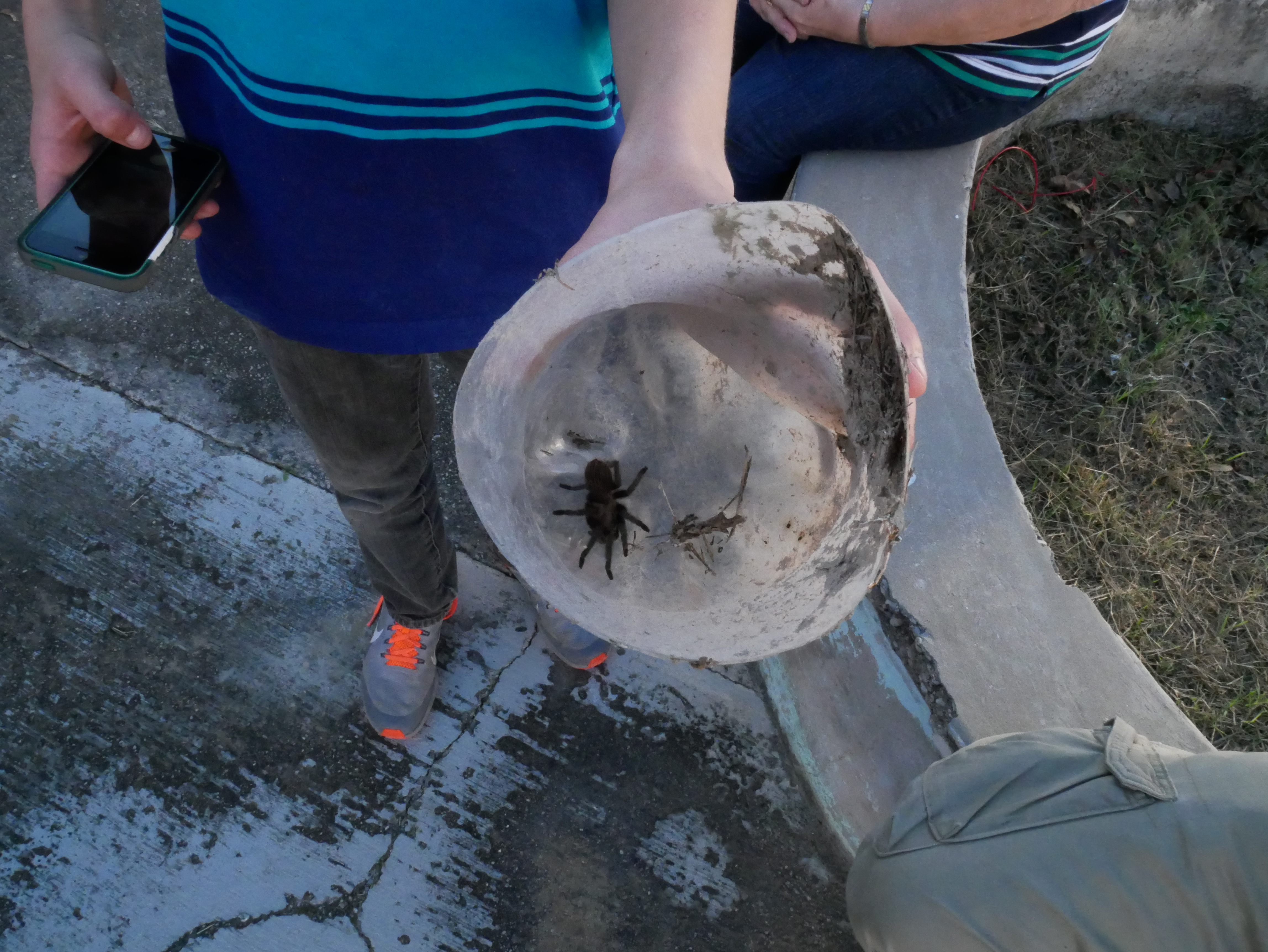 The above picture show the outside of the building, the critters we encountered, and our family accommodations. Everyday in our room we found spiders of this size both in the morning and at night… Just kidding! The spider you are seeing above was found by one of the missionary kids while overturning a rock out in a small field right as we were arriving. After that we didn’t see any spiders.

Above you will see the simple church where we gathered for an hour of morning prayer each day. Since Blaise is used to eating first thing in the morning, there was a few shouts of “I’m hungry!” heard inside the Chapel the first few days of prayer. Overall Blaise had a very fun time including playing soccer and in the dirt with the kids, talking with his new friends, and visiting homes with Mommy and Ksenia. For meals, we ate them all in the room pictured above, just close by the Chapel. Breakfast at about 9AM, Lunch at 2PM and Dinner at 7PM was an adjustment for our bodies used to earlier meals. The food was wonderful, sometimes simple and sometimes elaborate. Lots of eggs, tortillas and beans. Rice, beaf, chicken, sometimes tomales, beef soup, and mexican pizza! We enjoyed the food and Blaise was a very great help bringing joy to the people in the Kitchen when it was our turn to clean up. We would clean the floors and tables, bring back plates and silverware, wash them, and dry them. 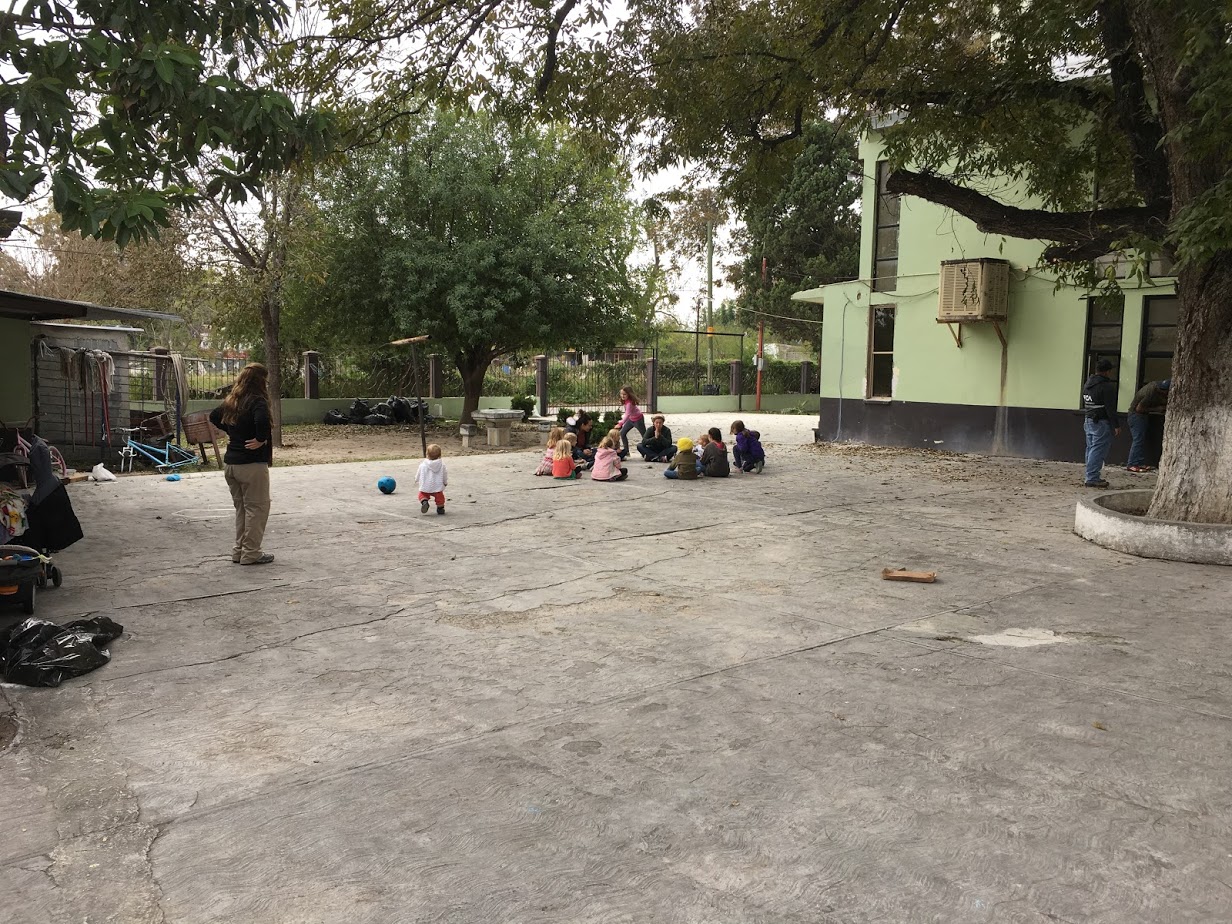 After breakfast, most days we would have some time after breakfast to just hang out. Blaise made friends with Aaron, the grandson of the local missionary family from Mexico. “Mi amigo” Aaron would call Blaise. They were a team of drummers on the five gallon buckets with big smiles on their faces. It was a joy to watch how kids can so easily break language barriers and just be. 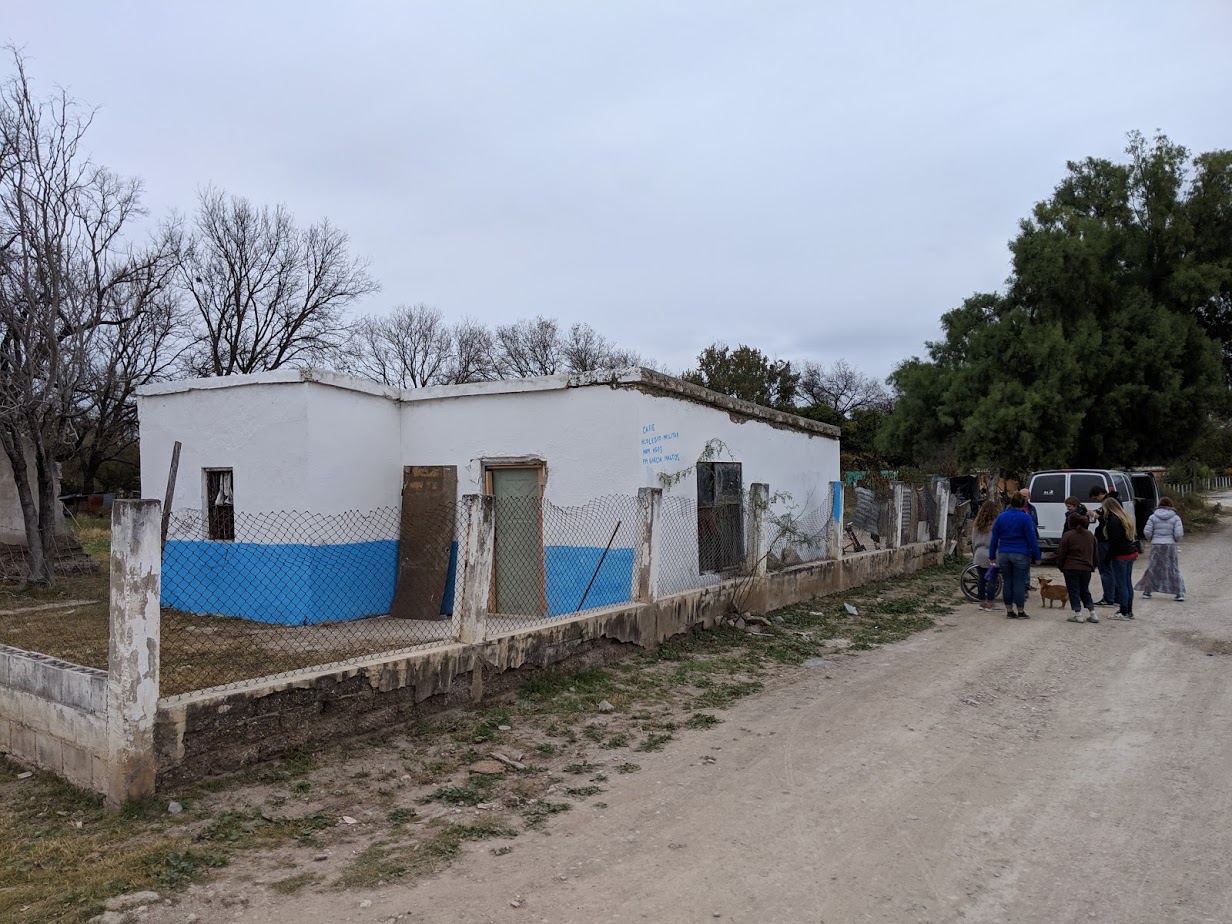 After breakfast and some community time, we split up into groups and did service work. Calena, Blaise and Ksenia went with their own group to do home visits (Sorry no pictures). My group went to a local family’s home, Marta and Jose. The husband’s leg had been amputated because of diabetes and though it was difficult, he was still working as a local vendor to support his family of four. For many years, he had sold treats such as snowcones, snacks, drinks, and other items for the people in his community. Our main job was to repaint their house. It turned out to be a great improvement for them. 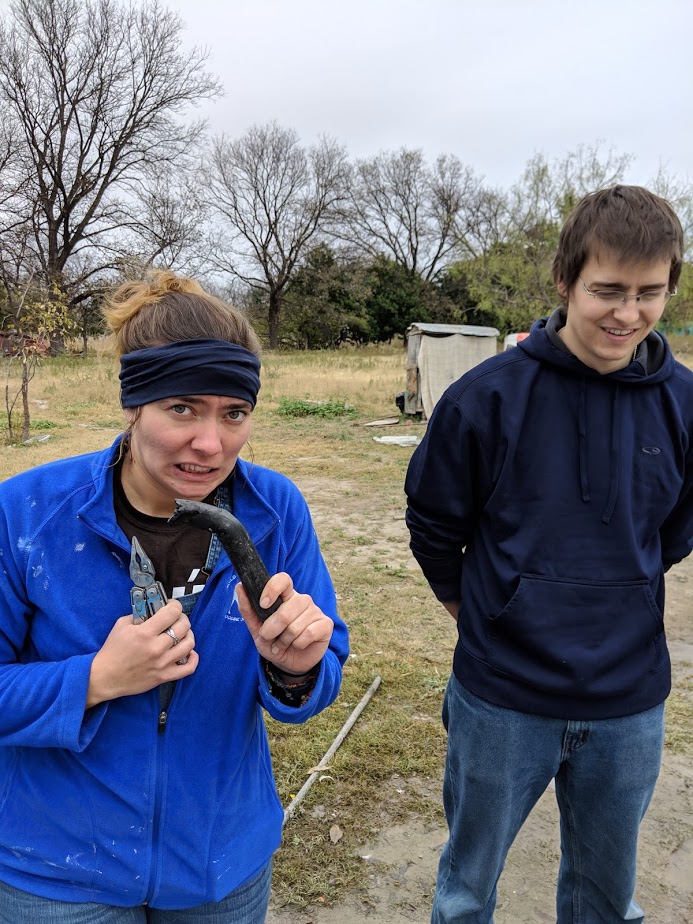 Interiorly, they were struggling with a leaking faucet. Andy, one of the missionaries from the U.S. stationed in Allende had recently crossed the border and gone to Lowes to pick up some plumbing parts and other things useful for the people. He has a lot of experience and God has really been using him to help the local people with different housing problems. He even spoke of one occasion where the exact piece he was in need of miraculously appeared just outside the house in the grass, saving him a long trip across the border and back. Could it have been St. Joseph? It kind of got me thinking about that miraculous staircase in New Mexico. Their kitchen faucet is the equivalent of a garden hose for us. After being challenged, I and two others successfully installed the new faucet. I turned it on and it sprayed out straight onto my shirt and the kitchen table. We weren’t finished yet. We found a rubber piece in the yard and heated it up to bend it downwards. It is definitely not pretty, but practical. Marta was grateful and overall it was a lesson for myself to be thankful for all the years of easy running water I have been blessed with in my own life. 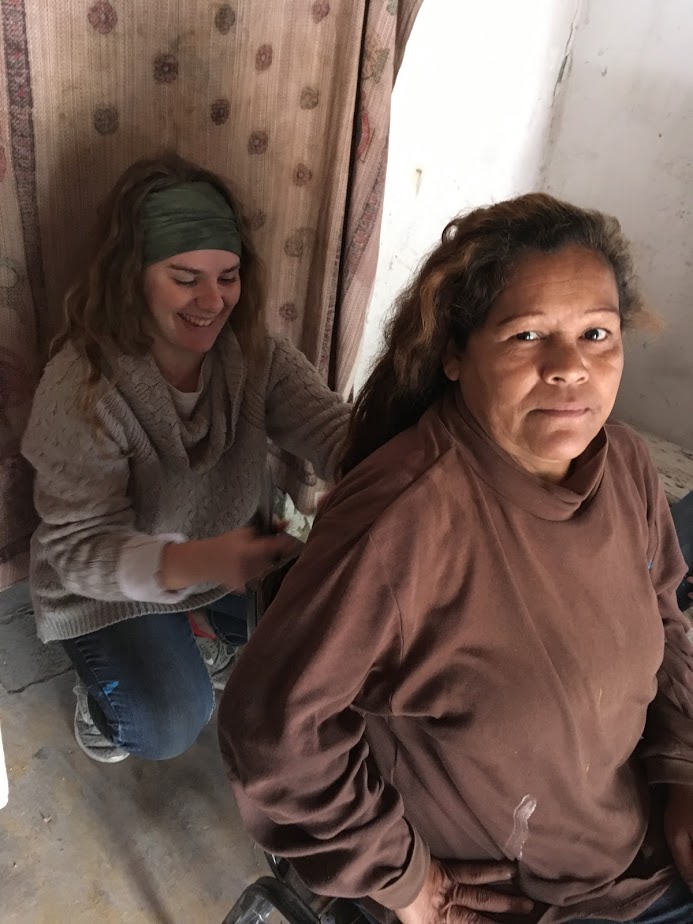 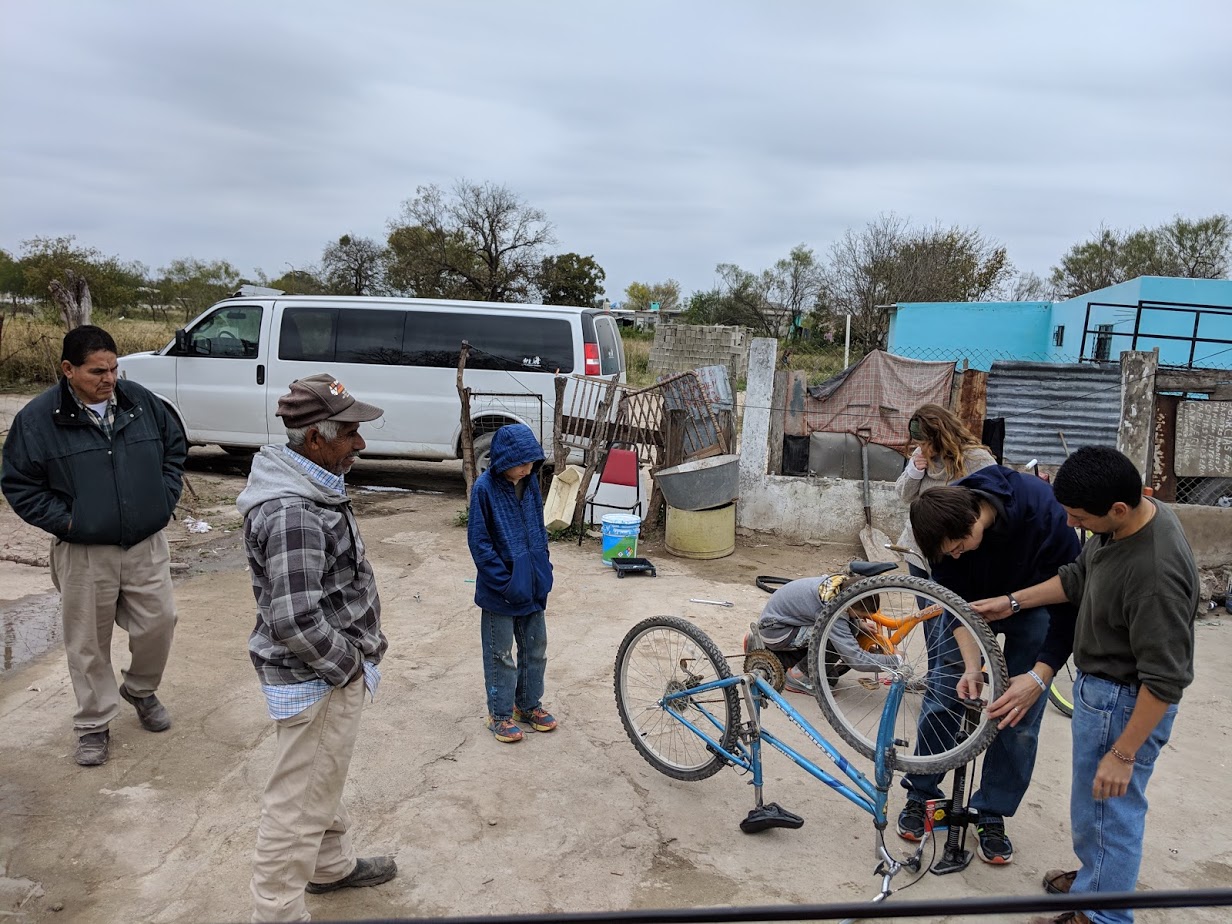 Our group also replaced the back exit of their house with a real door. The girls gave Marta a haircut and we tinkered with the bikes, fixing 1 out of 3. Our final day, (3 of 3 I believe), I got our group together to be part of my music video, Pray, Hope & Don’t Worry. You can see the footage from their house in the final minute of the video. 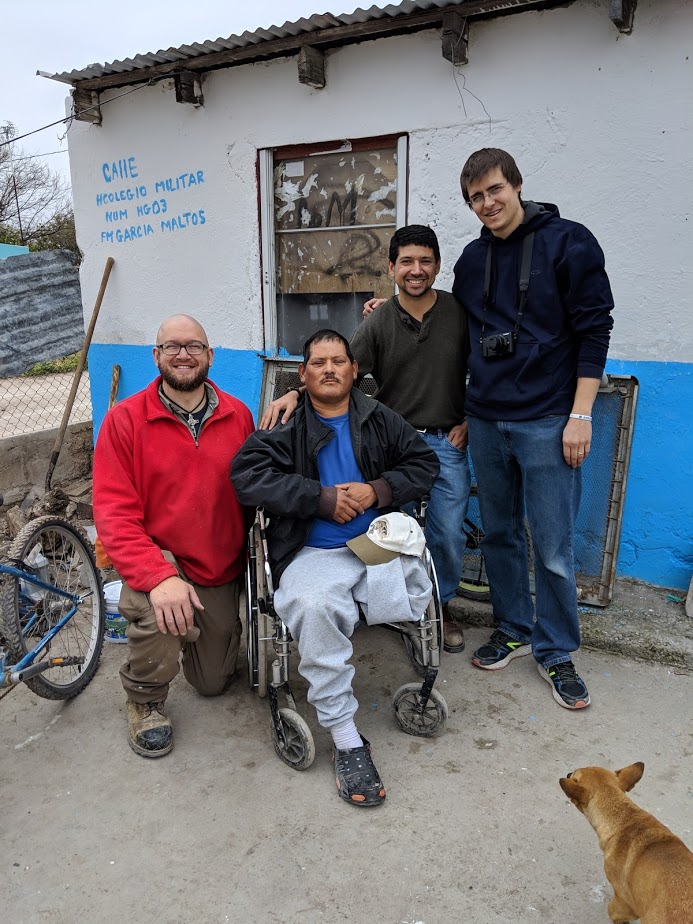 Overall, the service time was blessed. Besides our work, we also had good conversations. I especially enjoyed talking to Jose about his work and my work of being a musician.

On the way home on our second day, we visited a man named Oscar, the man in flannel. Armando is pictured with him. Armando is a full-time missionary with FMC. Learn more from Armando about his experience praying with Oscar (scroll to 11/30/18) here: https://agoodworthfightingfor.weebly.com/

I reunited with Calena, Blaise and Ksenia at lunch and remained with them the rest of each day. From about 2-4PM we were able to have our own family time, which consisted of reading books, napping and making up funny stories with Blaise. It was a huge blessing of the mission trip to have this time together as a family to just be and to rest. 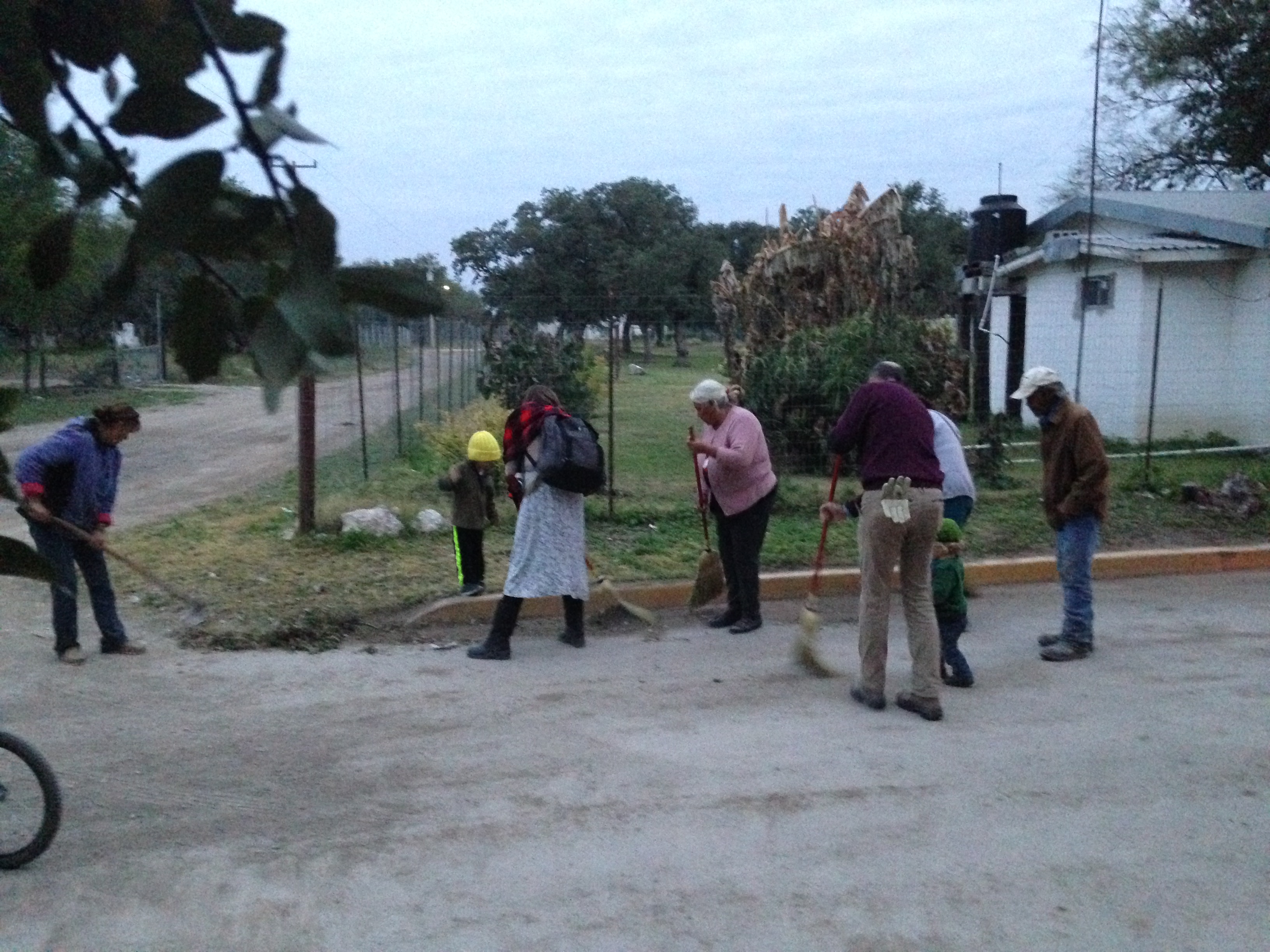 In the evenings, we went out in different groups (Our family remained together) to share our faith and to pray with the local people. At our first location, we were out in the country in a small neighborhood. There were only about 15-20 houses and we would knock on doors to invite them to come listen to our testimonies and pray with us. It turned out that the government had something funny going on. There was an approaching election so the sitting party was offering people local work in their area of painting and cleaning the streets to make money. It was a strategy to make the people feel good about that party for the next election. There was a group of people in the neighborhood outside finishing up their work for this government project. Painting a curb and sweeping the road. They were the only people who appeared to be home at the time. Our mission was starting. Nobody was coming. Calena led us by walking over there and talking to the people. She asked if she could help do the work. Soon Blaise had joined the party. I ended up talking to a few high school age guys and sharing my testimony with them in spanish. They got the gist of it and we left that evening feeling like we had accomplished at least something small by introducing ourselves, helping out and sharing why we were Christians and there in Mexico with them.

The following evening we joined a different group and went across town. A local family had prepared a meal for us and the local people. Calena and I shared our testimonies. This was a much more formal process than the night before. Calena was more nervous than me since she hadn’t spoken in front of a group and she did a great job!

One evening we stayed in and listened to the testimony of Antonio, the local full-time missionary with FMC and grandfather of Blaise’s friend Aaron. His testimony was powerful! Here are just two nuggets: 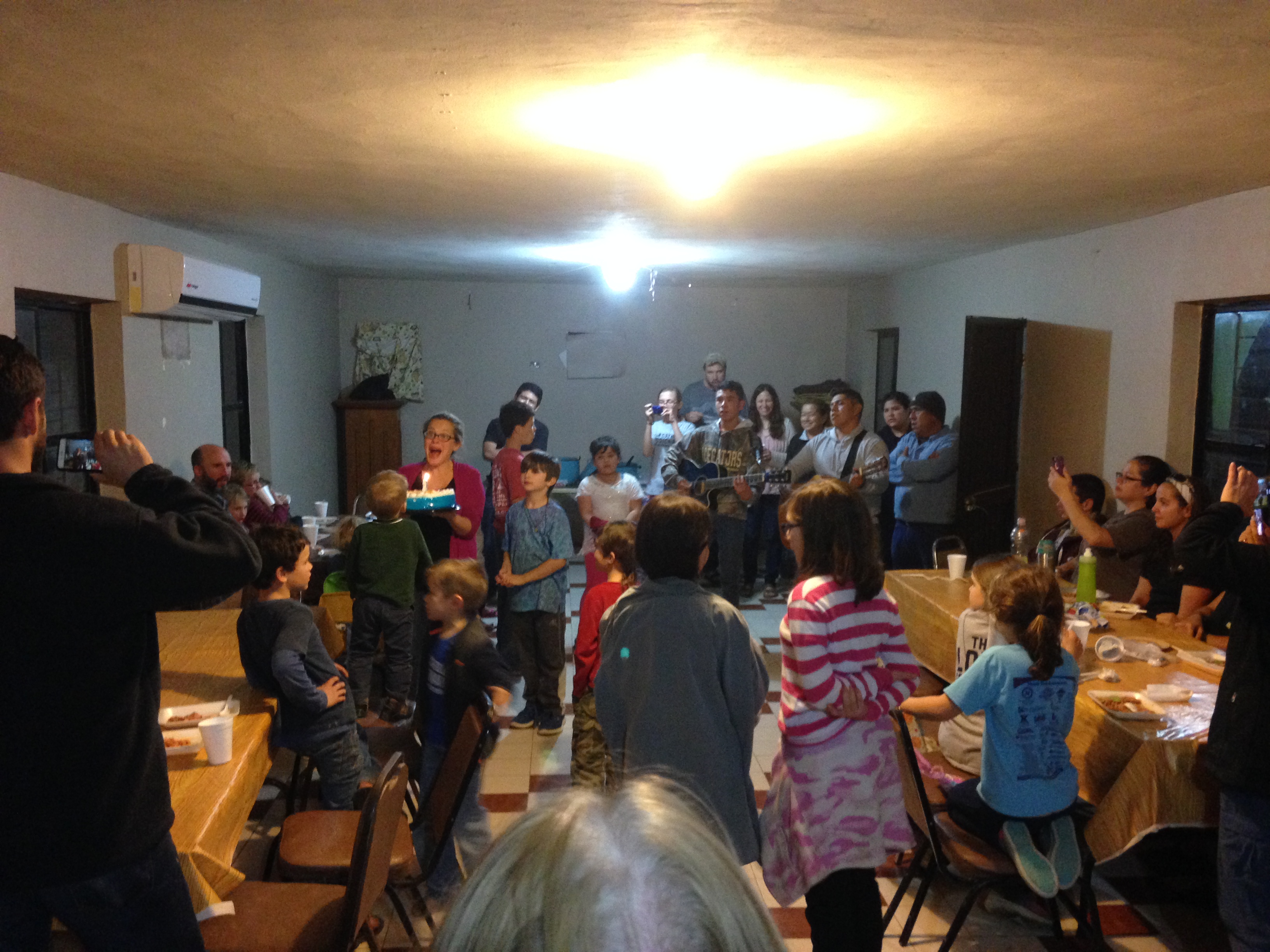 On the second or last night of our mission trip, we celebrated the birthday of one of the missionary boys! The pinata was a lot of fun for the kids. The sons of Antonio did a birthday song for him and Calena and I were both in strong agreement that it is a lot better than the american ‘happy birthday’ song. 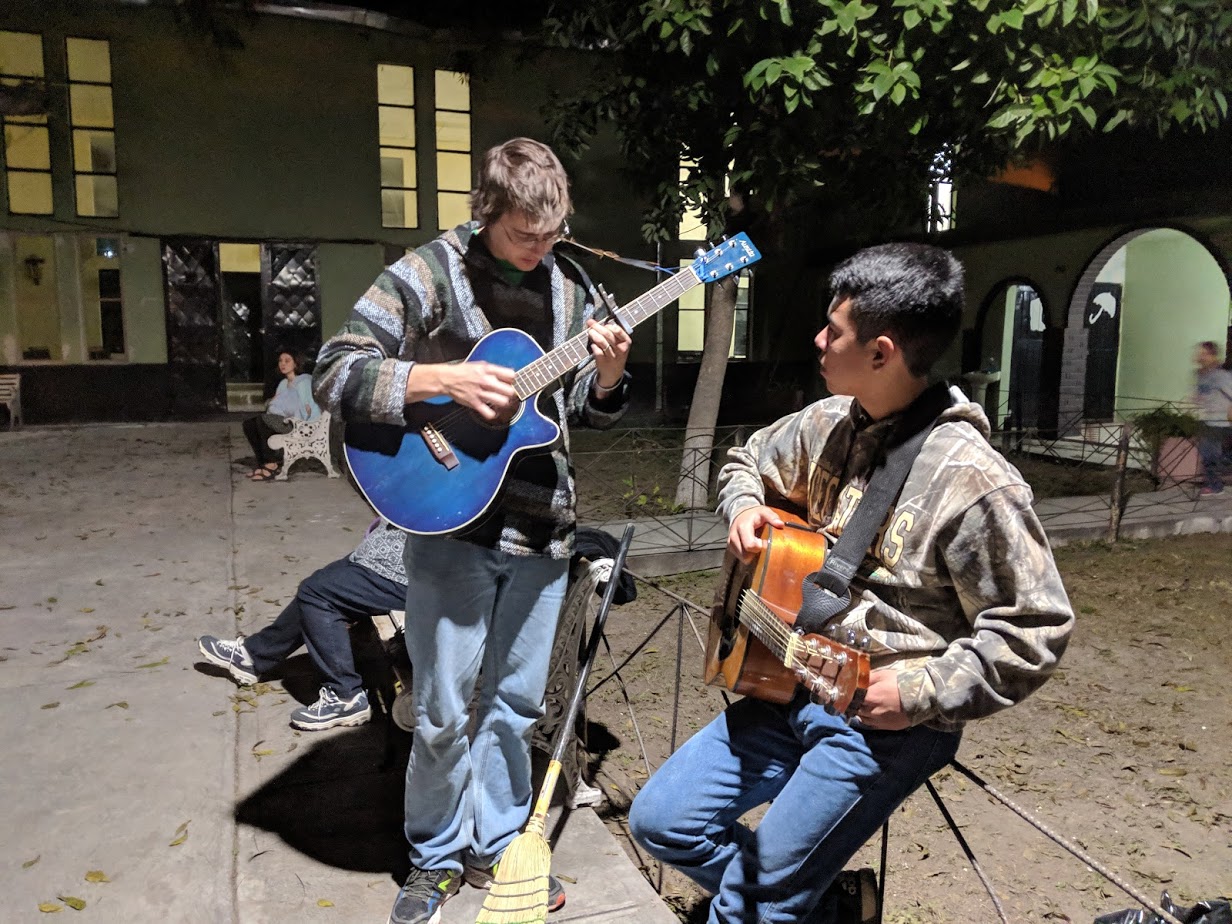 Lalo, one of Antonio’s sons, is a young and talented guitarist. We had a fun conversation and I shared a few of my songs with him. It was a great night to be outside. I forgot to mention that it was actually really cold there most mornings and nights and even some of the days. One of the days the high was no more than 40 degrees. But this night above was a beautiful night to just be outside among people, sharing music and a birthday.

Not pictured, we also were able to have a desert day of prayer. We literally drove to the desert to pray for about two hours. Our kids did very well. It was actually the first day we saw the sun in Allende as it had been overcast skies all week. The sun was very refreshing and warmed us up! I prayed for the first hour while Calena watched the kids and half prayed, half relaxed with Blaise.

Pictured above, we gathered on the final day to process the trip together:

What I want to leave behind: My complaining and impatience when I suffer physically and when things don’t go the way I want them to. The pursuit for the perfect and secure American standard of living.

What I want to take home: The love for Jesus crucified. Gratitude for all that I have. A surrender to His plan and His will.

As I now sit at work 1,596 miles north of Allende, Coahuila, Mexico I am trying to renew my commitment of those things. -Jacob

P.S. Check out ‘Pray, Hope & Don’t Worry’ music video. You will see some scenes from Mexico in the middle and end.