I have two new original songs to share with you that I was able to finalize this month.I decided to put Fr. Kapaun (man on the right) as the background image. He was a Catholic priest, Army Chaplain, medal of honor winner, and soon to be canonized Saint. (God-willing) Here is more info about him taken from https://www.army.mil/medalofhonor/kapaun/

(If you want to go straight to the music, just scroll down)

Chaplain Emil J. Kapaun, while assigned to Headquarters Company, 8th Cavalry Regiment, 1st Cavalry Division, distinguished himself by extraordinary heroism, patriotism, and selfless service between Nov. 1-2, 1950. During the Battle of Unsan, Kapaun was serving with the 3rd Battalion of the 8th Cavalry Regiment. As Chinese Communist forces encircled the battalion, Kapaun moved fearlessly from foxhole to foxhole under direct enemy fire in order to provide comfort and reassurance to the outnumbered Soldiers. He repeatedly exposed himself to enemy fire to recover wounded men, dragging them to safety. When he couldn’t drag them, he dug shallow trenches to shield them from enemy fire. As Chinese forces closed in, Kapaun rejected several chances to escape, instead volunteering to stay behind and care for the wounded. He was taken as a prisoner of war by Chinese forces on Nov. 2, 1950.

After he was captured, Kapaun and other prisoners were marched for several days northward toward prisoner-of-war camps. During the march Kapaun led by example in caring for injured Soldiers, refusing to take a break from carrying the stretchers of the wounded while encouraging others to do their part. Once inside the dismal prison camps, Kapaun risked his life by sneaking around the camp after dark, foraging for food, caring for the sick, and encouraging his fellow Soldiers to sustain their faith and their humanity. On at least one occasion, he was brutally punished for his disobedience, being forced to sit outside in subzero weather without any garments. When the Chinese instituted a mandatory re-education program, Kapaun patiently and politely rejected every theory put forth by the instructors.

Later, Kapaun openly flouted his captors by conducting a sunrise service on Easter morning, 1951. When Kapaun began to suffer from the physical toll of his captivity, the Chinese transferred him to a filthy, unheated hospital where he died alone. As he was being carried to the hospital, he asked God’s forgiveness for his captors, and made his fellow prisoners promise to keep their faith. Chaplain Kapaun died in captivity on May 23, 1951. Chaplain Emil J. Kapaun repeatedly risked his own life to save the lives of hundreds of fellow Americans. His extraordinary courage, faith and leadership inspired thousands of prisoners to survive hellish conditions, resist enemy indoctrination, and retain their faith in God and country. His actions reflect the utmost credit upon him, the 1st Cavalry Division, and the United States Army.

The second song is ‘Fields of Green’. In the Gospel of John, chapter 10, Jesus says “I am the Good Shepherd” (verse 14) and “My sheep hear my voice, and I know them, and they follow me.” (verse 27). This song is a good reminder that Jesus himself calls us his sheep – a simple animal. We currently live in an age of crazy advancements in technology, communication, and information availability. More than ever, I think we are tempted to think that we are too smart and advanced to think of ourselves as sheep in need of a shepherd. If we are humble and obedient, listening to the Shepherd, then he will lead us to the beauty of Heaven. ‘Fields of Green, blue blue streams, skies forever clear, and fruitful trees.’ This imagery is meant to channel my longing for Heaven, the most beautiful place.

But for the duration of our time on earth, since we are in enemy territory (where Satan has power), we are attracted to the land of the goats (sin, evil, self-reliance) since there is temporary pleasure and advantage to be gained if we follow this route- which ultimately will lead to Hell.  I praise God that He is a Good Shepherd. I thank Him for the times He has left the 99 to save me from my sins.

This song includes guitar, vocals, and banjo by myself. I hired three different musicians through FIVERR to do the drums, cello, and ambient guitar. My brother Eric did the guitar solo. I hope you enjoy the song. I look forward to sharing new music with you next month!

“Nothing is more beautiful than love. Indeed, faith and hope will end when we die, whereas love, that is, charity, will last for eternity; if anything, I think it will be even more alive in the next life!”
-Blessed Pier Giorgio Frassati 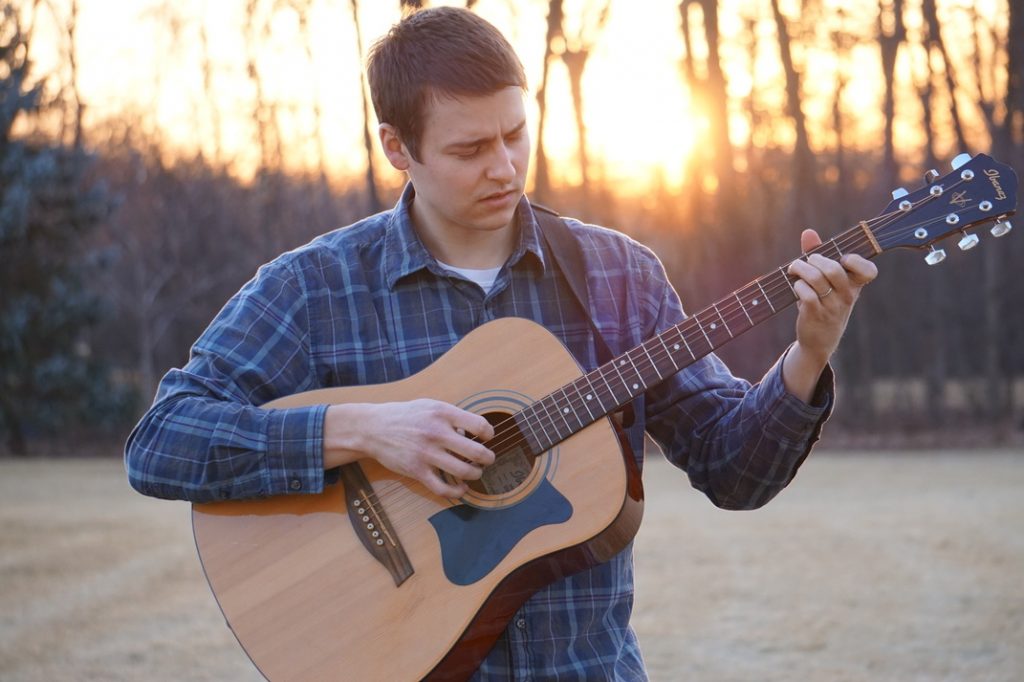 I was able to create and produce these songs thanks to my support team! If you are not a member and interested to learn more please visit: JacobRuddMusic.com/support-team