Last Tuesday November 24 we spent the day at Arizona State University with the FOCUS missionaries. I was blessed to reconnect with my old roommate, Laura. We also met Becca, Ozzy, and David (who is also from UNL). They have perpetual adoration so we joined the missionaries for their holy hour. We pushed Blaise around in his umbrella stroller. Jacob jokingly told a group of college students, “He is late for his class. The professor is trying to find his class still.” They saw tiny Blaise alert and content being wheeled around.

We stayed there until evening Mass then headed home.

On Wednesday we climbed a mountain with Blaise on Jacob’s back. It was perfect weather in the afternoon. Other hikers wouldn’t always notice that Jacob had Blaise on his back. It was a blessing to hike and be in God’s creation. As Blaise Giorgio is named after Blessed Pier Giorgio Frassati, we thought it was appropriate to climb a small mountain. 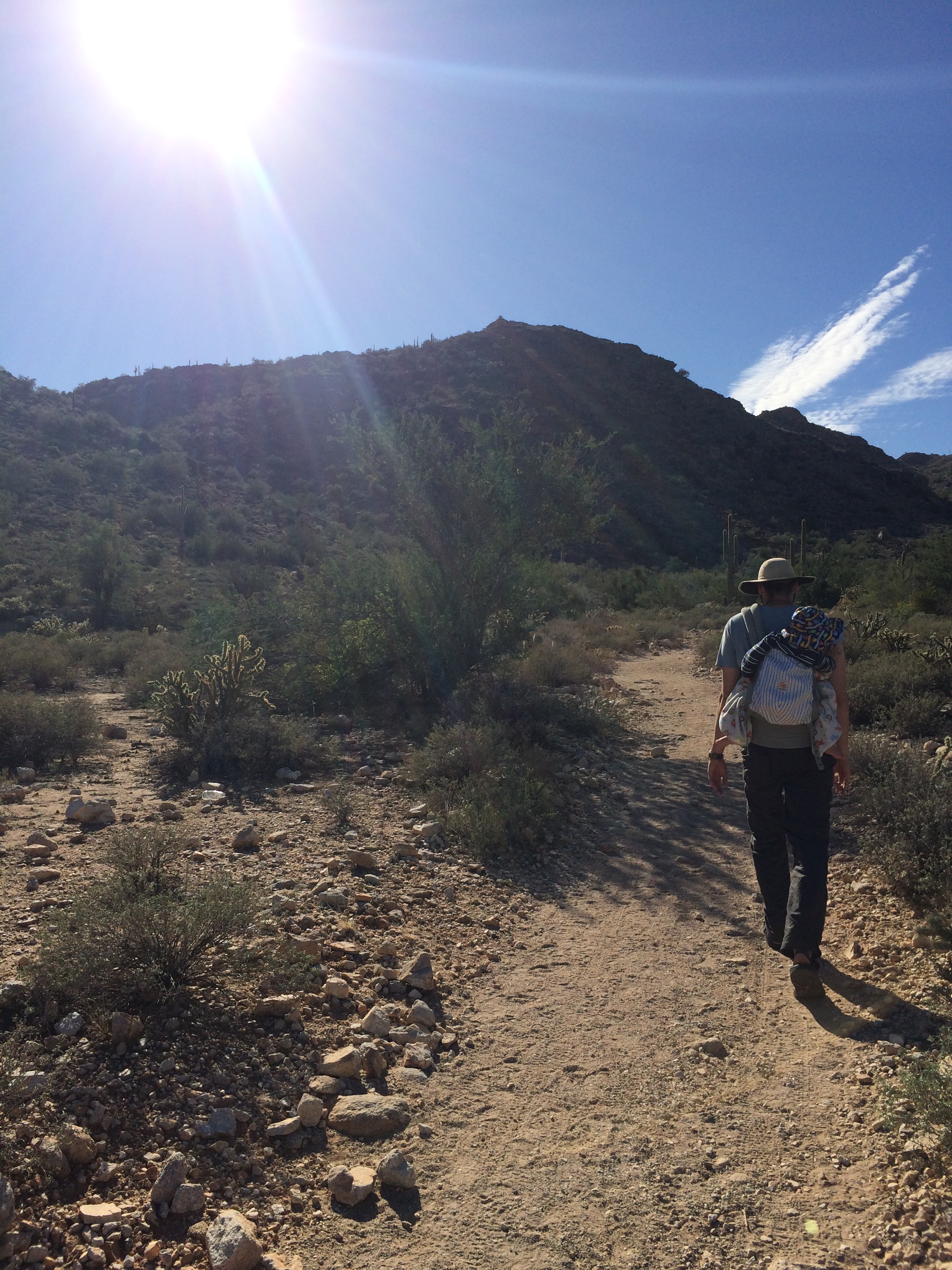 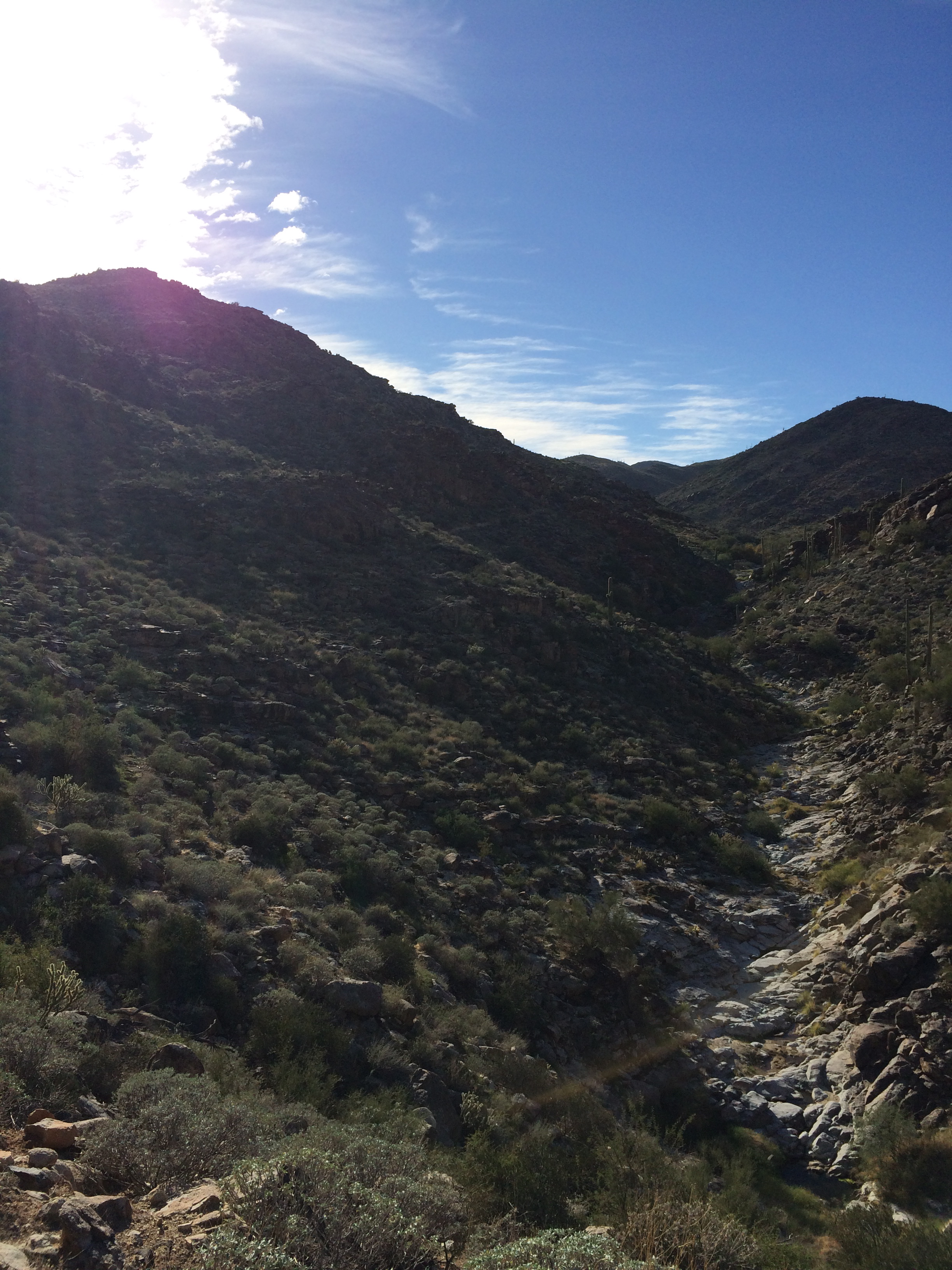 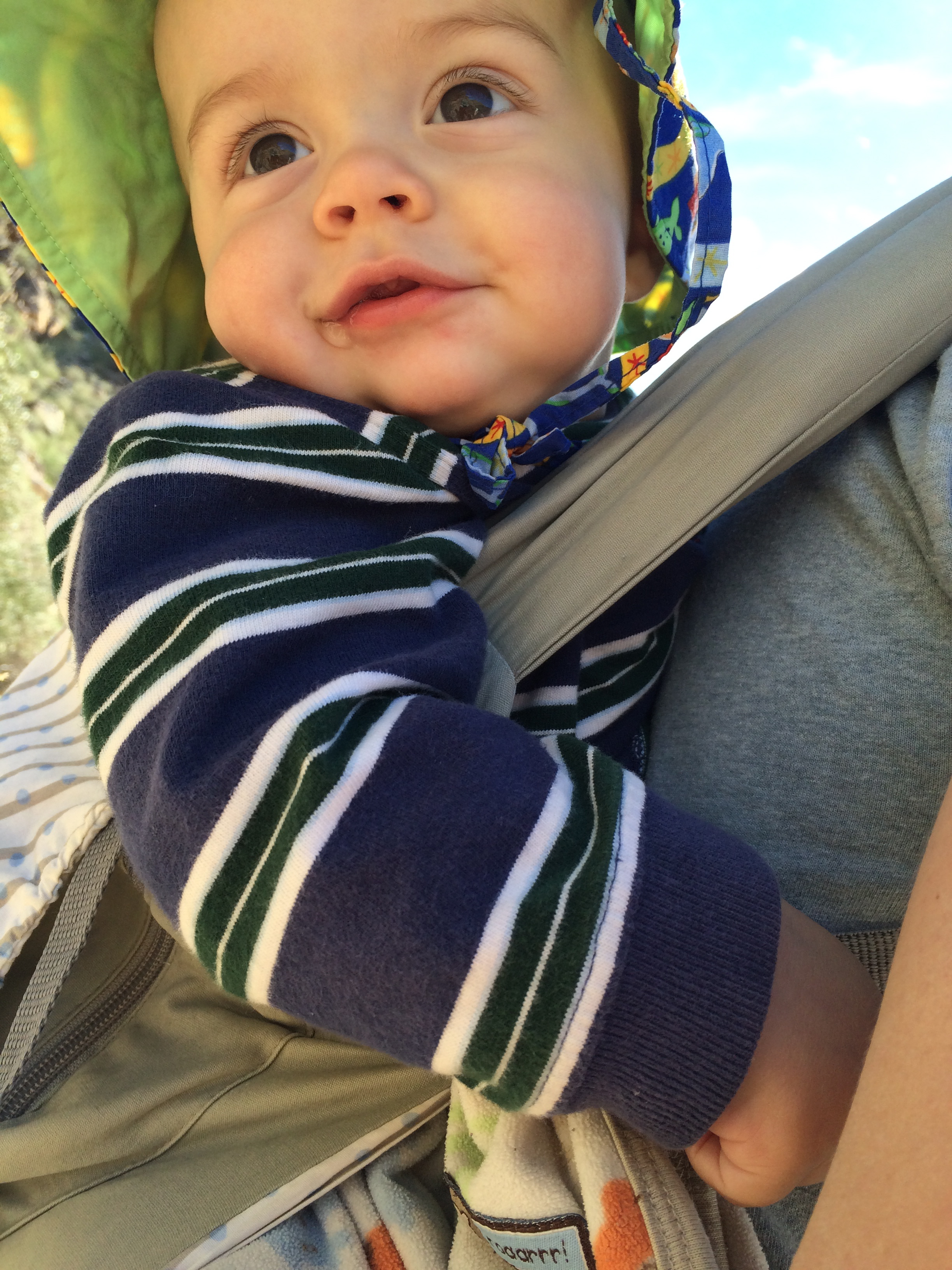 Then in the evening we had dinner and met Jessie’s friend, Marcos.

On Thursday for Thanksgiving we went to morning Mass then rested. We joined the Missionaries of Charity in the evening for their feast. We thought we would be serving a lot of meals to the poor, but instead we were fed right when we arrived. We were in solidarity with the residents of the homeless shelter, because we were away from our families for the first time. We met a young mom with four children and her boyfriend. They had an incredible story about how their new baby, who is just one month old, was born. They had got into a bad car accident when she was 37 weeks pregnant and she had to have an emergency c-section. The police who analyzed the accident said that if the boyfriend hadn’t manuevored the car like he did they would have all died (two kids, two parents, and one baby in utero). Jacob and I enjoyed holding their very tiny baby boy, Valentino.

Here is Blaise devouring an orange: 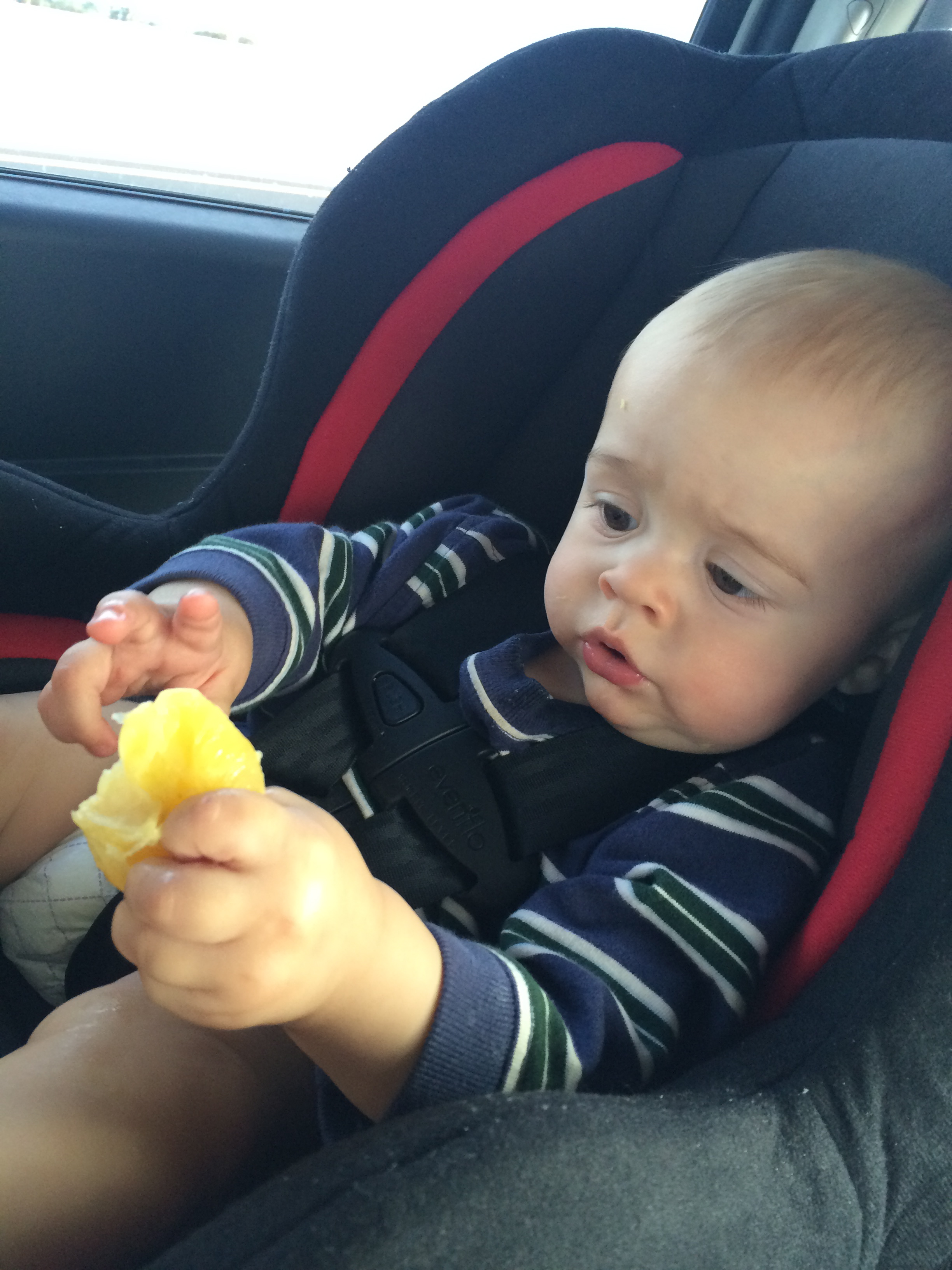 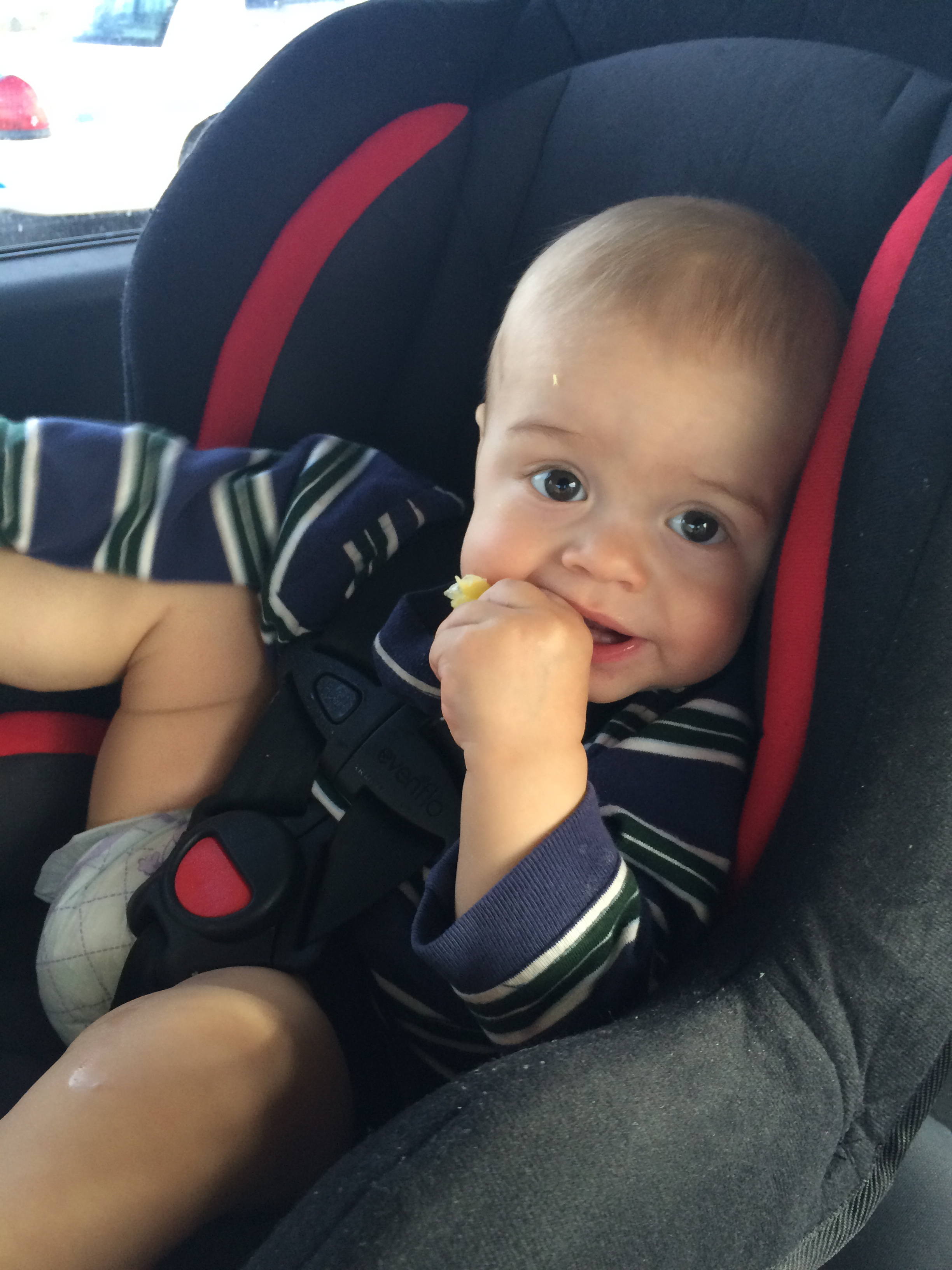 Then Friday was spent preparing the house for our benefit concert in the evening. Jessie arranged a concert for us to play in with her and a few other musicians at her house.

We were able to share our story, practice Spanish with the Spanish speaking friends who came, pray with everyone, share food, etc. Jacob played his songs “Miguel Pro”, “Saint Pio of Pietrelcina”, “Yonder By the River Shore”, and “I See His Blood Upon the Rose.”

He also played “Saint Therese of Lisieux” with the chorus being in Spanish. Finally, Jacob played his song, “Saint Teresa of Calcutta” for the first time:

“Lord when did we, see you hungry and give you food? … Truly I say to you, whatever you do to the least of your brethren, you did it to me!” 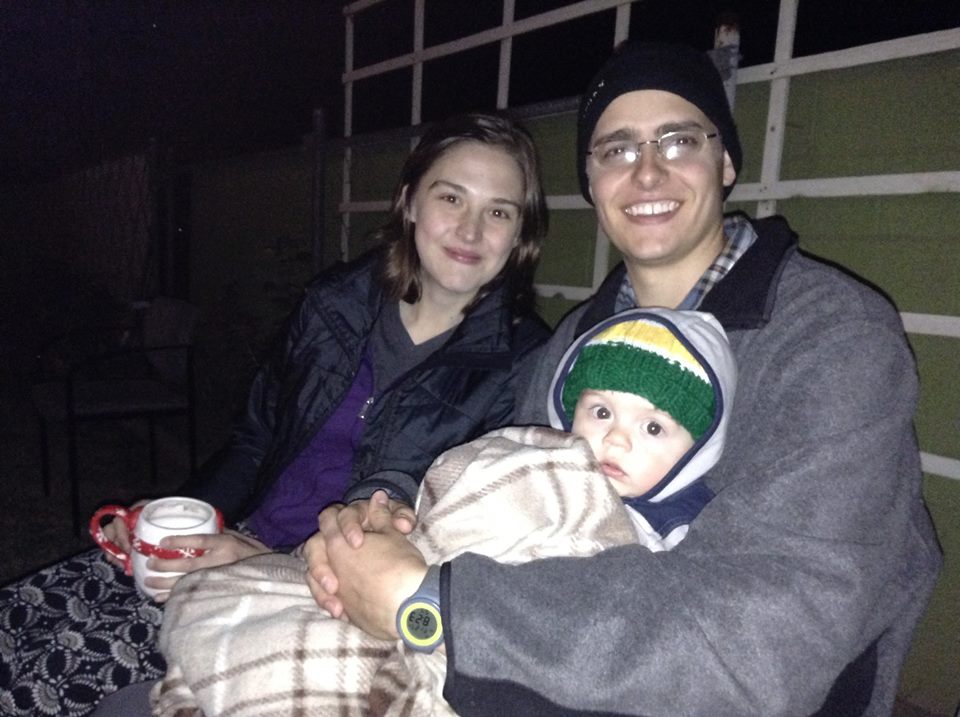 On Saturday Jacob, Andres, Jorge, Pepe, Jessie, and sometimes I watched “The Hobbit” in Spanish. We went to confession at a parish nearby. When we were waiting in line, Jacob pointed to a big image on the wall of our Blessed Mother and got Blaise to look up. We were saying to him, “Mama.” Andres, Jessie, Jacob, and I all saw Blaise mouth “mama.”

We had another busy night that Saturday evening with people over for the Hispanic prayer group Jessie is apart of. They had a fire outside, we prayed the Divine Mercy in Spanish, listened to Alvira share her pilgrimage journeys to Brazil, Spain, and the Holy Land. We also had snacks, and met more of Jessie’s friends.

For Sunday Mass we went to a Spanish Mass with a priest from the Dominican Republic who was raised in Harlem, NY. Then Jacob and Jessie played soccer with a group that plays regularly. Jessie scored the game-winning goal!

Blaise really enjoyed picking grass and crawling around in it. He also thought it was so funny that I tried to do a pull-up with him in the wrap on me. Maybe because I can’t even do a pull-up without him on me! He stood up on his own for the first time grabbing Jessie’s leg at home in the evening. He started to giggle when he finally made it up.

Blaise also enjoyed Jacob holding his hands up as he ran and kicked the soccer ball!

Overall, it was a full and fun week.

4 thoughts on “Thanksgiving Week (by Calena)”